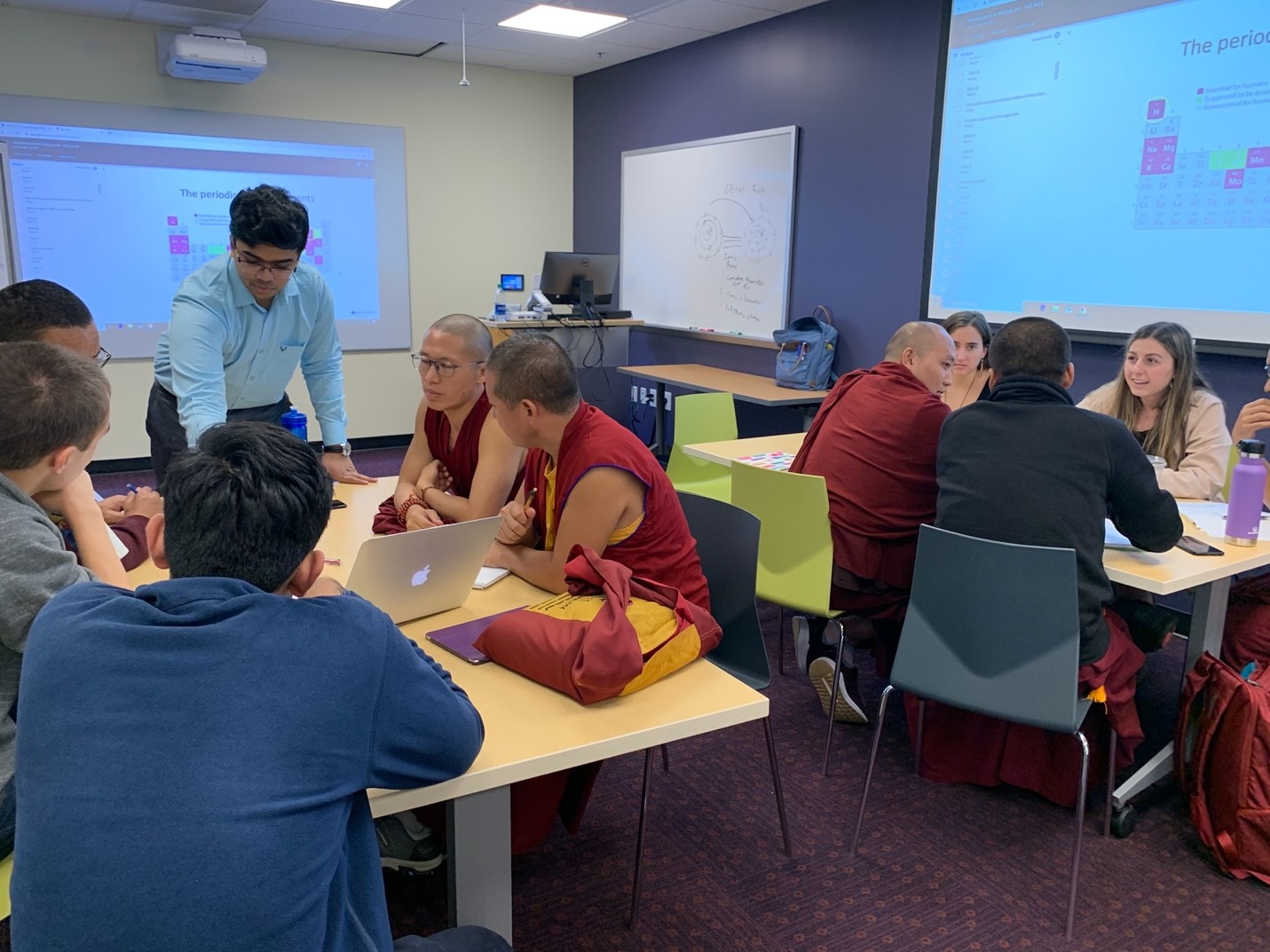 ETSI Peer Mentoring Program is a student-led academic support program that provides tutoring and academic mentoring sessions to the Tenzin Gyatso Science Scholars—a group of Tibetan monastic scholars studying at Emory University. This program originated ten years ago, when the first cohort of Tenzin Gyatso Science Scholars, henceforth called the Scholars, started residency program at Emory University and needed extra support to thrive in a completely new environment. Some Emory students volunteered—helping not just with academic requirements but also with cultural and linguistic needs. The first cohort returned to India after completing their residency program but a wonderful legacy of kindness, generosity, and fellowship has been created, which has evolved and grown into a well-organized body that is now formally called the ETSI Peer Mentoring Program.

This program is a wonderful by-product of the Emory-Tibet Science Initiative’s science educational program. It has impacted the Emory community at a fundamental level and created a rare opportunity for Emory students to interact and exchange ideas and experiences with the monastic scholars. Dr. Arri Eisen and Dr. Jane O’Connor, ETSI’s faculty leaders for biology and English units respectively, had been instrumental in inspiring and recruiting student mentors, especially at the early stage of the program.

The program is led by the Program Director who oversees administrative management of the ETSI Peer Mentoring Program and the long-term development of the program.

ETSI Peer Mentors consist of both undergraduate and graduate students who have a strong background in and a firm understanding of the classes that the Scholars are enrolled in and who volunteer to share that knowledge with the Scholars. Mentoring sessions are held several times a week focusing on different topics.

The following individuals are currently serving as mentors for the program:

The evolution of the initial informal group into a well-organized peer mentor group began soon after Michael Goldberg (18C) was recruited by Dr. Arri Eisen in 2017 to tutor the Science Scholars. As he recounts, “After realizing their overwhelming hunger to devour anything I could offer, I started reaching out to some qualified friends to help me teach them as much as we could manage.” A number of students had since then served as mentors to the scholars for more than one semester. Below are some of the most recent mentors:

The ETSI Peer Mentoring Program: An Innovative Approach to Transcending the Boundaries Between Science and Understanding

The ETSI was created at the invitation of His Holiness the Dalai Lama with the goal of introducing modern science education to Tibetan monastics. The Tenzin Gyatso Science Scholars–or the “Emory monks” as they are sometimes called–are enrolled in numerous science classes at Emory so they can return to their monasteries and nunneries overseas and contribute to long-term science education.

For several years, a handful of Emory undergraduates have informally volunteered to help the Science Scholars succeed in their classes such as biology, physics, math, and English.

“I actually came to Emory in some small part due to the ETSI program being so interesting,” says Michael Goldberg (18C), a biology major who is now attending medical school at the SUNY Downstate Medical Center in Brooklyn, New York.

Goldberg was initially approached by Dr. Arri Eisen of Emory’s Department of Biology in 2017 and was asked if he could tutor the Science Scholars in chemistry to bolster their understanding of biological principles. These informal chemistry lessons quickly evolved into something much greater.

“I spoke with the monks about other topics they might be interested in,” says Goldberg. “After realizing their overwhelming hunger to devour anything I

could offer, I started reaching out to some qualified friends to help me teach them as much as we could manage.”Since Goldberg’s graduation in 2018, numerous Emory students have remained committed to helping tutor the Science Scholars. The arrangement, now called the ETSI Peer Mentoring Program, is currently led by Jacob Klaus (21C) who has pushed to expand the once informal tutoring into an official program that enhances the Science Scholars’ overall educational experience. Presently, the ETSI Peer Mentoring Program has nearly a dozen Emory student volunteers who host numerous tutoring sessions each week.

Former mentor Karine Kasti (20C) recalls how she looked forward to the Aha! moments the scholars experienced during her chemistry and biology sessions. “Once one scholar understood a concept or example problem, this also helped facilitate others' understanding and guided our style of mentorship throughout the program.” (Kasti, pictured to the right, is shown reviewing topics of cellular biology with several of the Science Scholars in October, 2019).

Although they attend lectures alongside other Emory undergraduates, many of the Science Scholars credit the ETSI Peer Mentoring Program with their comprehension of the material.

In describing the many ways the ETSI Peer Mentoring Program has helped him, one of the Science Scholars Tenzin Gyaltsen said “I like [the mentors’ approach to teaching through] graphs and talking slowly. We understand [through the mentors’ style of] teaching.”

Outside of traditional tutoring sessions, the ETSI Peer Mentoring Program coordinates events that expand on what the Science Scholars learn in the classroom. In December of 2019, Dr. Anthony Martin of Emory’s Department of Environmental Sciences gave the Science Scholars and mentors a private tour of the Fernbank Museum of Natural History. During this excursion, scholars were able to connect what they had learned about evolution in their biology classes to the museum exhibits.

“It helped me understand the evolution theory better,” says Thupten Khetsun, one of the Science Scholars. Another member of the current cohort, Kalden Gyatso, added, “It was a great method to learn about evolution in biology class and then see the exhibits in the museum. As in the class, we read, listen, and collect information. Then we can feel and experience [it] when we go to the museum.” (Picture to the right: mentors, the Science Scholars, and Dr. Martin at the Fernbank Museum in December, 2019).

In March of 2020, the Emory community was notified that in-person classes were being suspended. Despite this interruption, the ETSI Peer Mentoring Program transitioned its operations online using Zoom.

“The transition from in-person mentoring to online was initially quite challenging, but I’m very impressed at how quickly mentors learned to use the new technology to connect with the monks and make sure our mentoring was helpful to them,” says George Poppittz (23C), one of the ETSI peer mentors.

Despite the challenges that the COVID-19 situation has introduced, the ETSI Peer Mentoring Program continues to strive to help the Science Scholars and the overall mission of the Emory-Tibet Science Initiative.