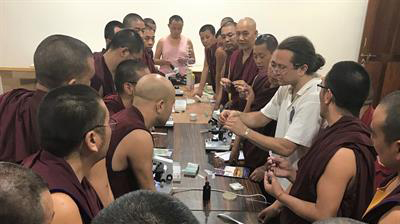 A Special Issue on ETSI in Frontiers in Communication

October 2021 -A Special Issue on ETSI in Frontiers in Communication

Frontiers in Communication is publishing a special issue on ETSI, entitled “The Emory-Tibet Science Initiative, a Novel Journey in Cross-Cultural Science Education”, guest-edited by a diverse team of ETSI professors: Robin Nusslock, a neuroscientist at Northwestern; Meena Balgopal, a science education expert at Colorado State; and Gillian Hue, a neuroscientist; Joel Zivot, an anesthesiologist; and Arri Eisen, a biologist, all at Emory University. The invitation to develop this special issue came thanks to an article published in Frontiers in Communication by Kelsey Gray and colleagues in 2020 when Kelsey was a postdoctoral fellow and Fulbright Scholar with ETSI. The issue, in which the articles appear as they are accepted, plumbs the transformational effects this visionary project of the Dalai Lama and Emory University has had on culture, education, and research worldwide.  Eventually, more than 50 authors—scientists, translators, and monastics—will contribute multiple perspectives and insights.  Highlights are numerous and include many collaborations between scientists and monastics: don’t miss Lobsang Gongpo and Dieter Jaeger’s exploration of the self and free will, and Lodoe Sangpo and Brian Dias and colleagues’ piece on monastic debate as a model for civil discourse, which has already received over 1,500 views.  Take a moment to check out this special issue and spread the word.