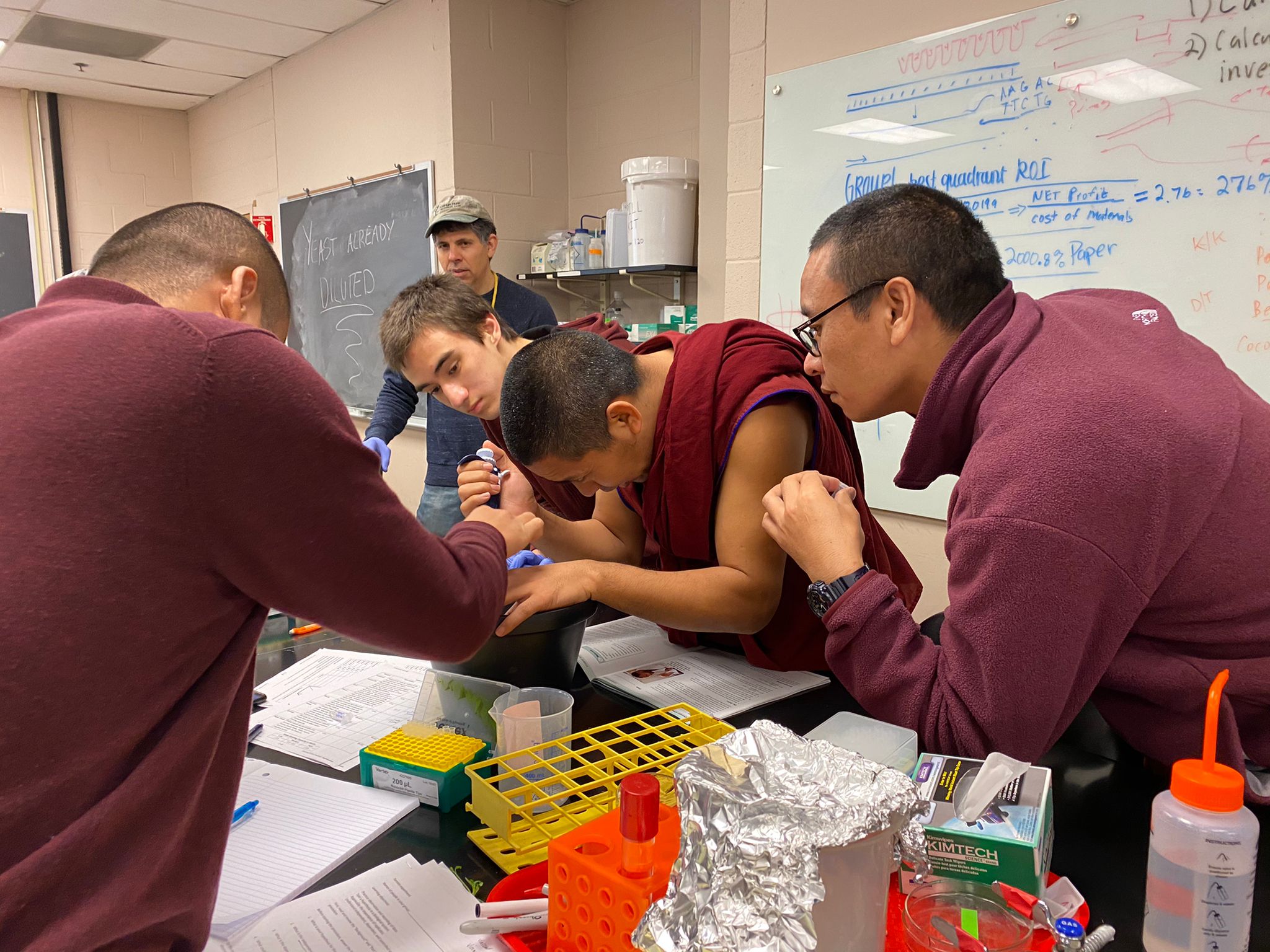 The Tenzin Gyatso Science Scholars have been visiting Emory for over ten years now, and with everyone returning to campus for the semester, they’re now inseparable from the community. The Professors and students form meaningful friendships and relationships with the Emory Monastics while they continue their science education.

The Emory-Tibet Science Initiative (ETSI) was formed in 2006 when His Holiness the Dalai Lama invited Emory University to collaborate with the Library of Tibetan Works and Archives in developing a sustainable and systematic science educational program for the Tibetan monasteries and nunneries. ETSI has since then developed and implemented a six-year science curriculum at several monasteries and nunneries, and starting in 2010, the initiative has brought the Scholars to Emory to take various courses including in biology, physics, math, and English. The ETSI Peer Mentoring Program, a group of undergraduate students, helps the Scholars master the material so they can teach it back at their institutions.

This year, we said goodbye to the 5th cohort, and welcomed the new 6th cohort to Emory Campus. The program has evolved past science mentoring sessions and now transcends its original goal. The ETSI Program has increased cultural exchange with the scholars. The sessions now feature history, psychology, poetry, and many other topics.

“The Scholar’s drive for knowledge has been clear since I volunteered here 2 years ago, so I wanted to give them something that I think would be intellectually challenging” says George Poppitz, Assistant Director of Education and lead mentor of the English sessions. “This cohort’s English is the best that I’ve seen, so we’ve had discussions on rhetoric and an increase in advanced writing and reading skills”.

Within biology and math, the Scholars are quickly progressing through their lectures on mitosis and exponents. “I was paired with the scholars back when I took biology, and they were some of the most insightful and hardworking people in the class. That’s why I wanted to join,” says mentor Becca Cohen.

Outside of the mentoring sessions, the ETSI Peer Mentoring Program’s mentors also helped the scholars acclimate to life at Emory and engage in cultural exchange. We’ve played soccer and frisbee with the Scholars while eating pizza at a picnic. “For the past two years, it was a true joy to get to know the 5th cohort and each individual member,” said David Goldberg, the current Program Director of the ETSI Peer Mentoring Program. “I am ecstatic and it has been a pleasure to learn about each of their backgrounds and how they view what we teach with their unique perspectives.”

Since returning to campus, it’s been difficult to tell who’s more excited: is it the monastics or the mentors? One thing is certain. The ETSI Peer Mentoring Program carries on the missions of the Emory-Tibet Science initiative; continues to spread knowledge and overcome cultural barriers.