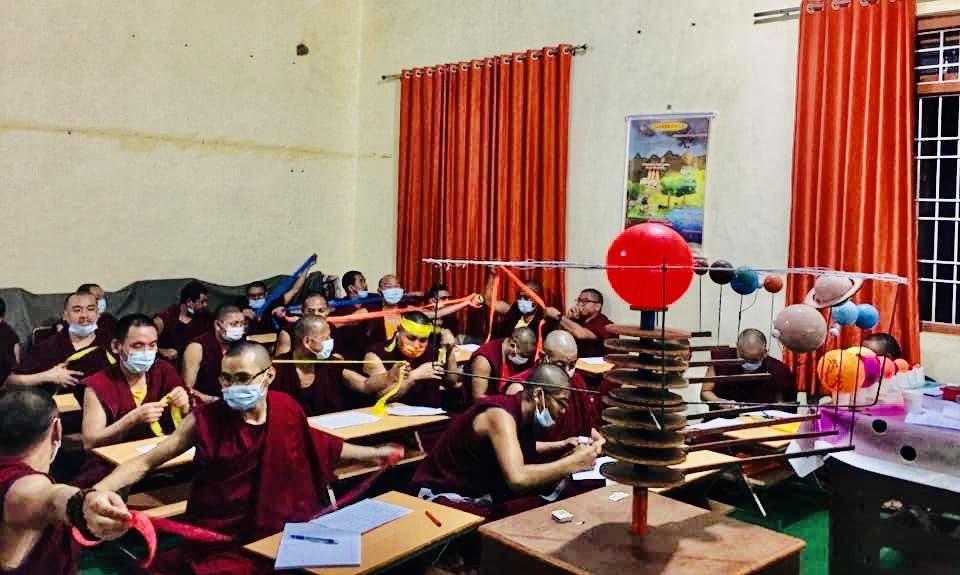 Monastic students conducting an experiment in astronomy class during the pandemic at Drepung Gomang Monastery.

The COVID-19 pandemic has deeply impacted education everywhere. The World Bank states that the pandemic “has created the worst crisis to education and learning in a century,” with 94 percent of students out of school worldwide at the peak of school closures.

According to UNICEF, in India, 247 million students in primary- and secondary-schools have been affected by COVID-19 school closures. The Tibetan schools in India and the monastic academic centers where ETSI has been running a science educations program since 2014 suffered similar disruptions to their learning. Schools were closed, and monasteries and nunneries were shut down. Education in many monasteries came to a complete halt, especially at the beginning and peak of the pandemic, because of the lack of infrastructure for remote learning.

Amid such challenges, the science education programs at ETSI’s partnering institutions were suspended. Not only physical infrastructure but also technical know-how is lacking in these institutions. Dr. Tenzin Tenkyong, a physics teacher at Sera Mey Monastery, writes, “One of the biggest physical and mental challenges was transitioning to an online mode since most monastics have limited technical knowledge and gadgets available. Due to the lockdown, no other option was available and in time we prepared tutorial videos about managing and operating these applications and attending to their queries and doubts through WhatsApp.”

These initial efforts resulted in creating online classes and developing new learning resources. The resources were shared with the larger monastic communities via YouTube and other social media platforms. Some of the earliest online courses were offered by former Tenzin Gyatso Science Scholars—monastics who did a 2-year residency program at Emory University to study foundational sciences. These scholars and other science teachers at the monasteries and nunneries took essential leadership roles in adapting the ETSI curriculum to virtual formats and offering classes to monastic students so that they were on schedule to complete their coursework.

Kelsang Khedup, a monastic science student at Gomang Monastery, says, “During this critical time, the administrators and teachers led us by protecting our health and ensuring our studies would continue as smoothly as possible through a systematic and timely approach.”

Creative use of interactive virtual platforms such as Google Classroom, Zoom, Telegram, and WhatsApp allowed a steady transition to online learning. In addition to the virtual platforms, the ETSI resource website containing a collection of in-class video lectures covering the whole six-year curriculum on Philosophy of Science, Physics, Biology, and Neuroscience, PowerPoint slides, textbooks, and activities has been effectively used by both teachers and students at many monastic institutions.

Stanzin Wangdan, a former Tenzin Gyatso Scholar, states, “I have seen and realized many positive [things] about living in a monastery, especially during the pandemic. [A]lthough we live in a huge number in a small area, which very likely [would have enabled] a quick spread of the disease, the daily monastic rules allowed us to follow protocol and helped control the disease. Also, our years of training in compassionate thinking helped us help one another physically and mentally.”

The pandemic might have disrupted in-person classes at the monasteries and nunneries, but the learning continued in an innovative and compassionate way.