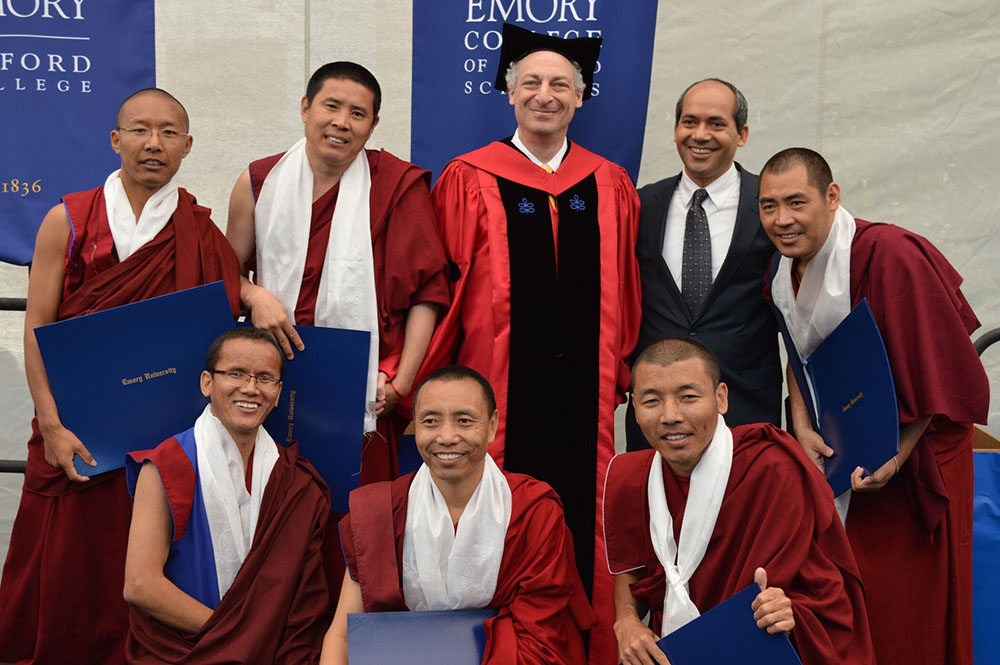 Dalai Lama invited Emory University to col-laborate with the Library of Tibetan Works and Archives (LTWA) on a comprehensive and sustainable science curriculum—an op-portunity supported by the university. ETSI was founded with the intention to create bridges between complementary systems of knowledge by educating future scien-tific collaborators who can contribute to new discoveries in the science of mind and body. ETSI offers new analytical tools to Ti-betan monastics while providing them with fresh perspectives on how to employ and adapt time-tested, Buddhist, contemplative methodologies for the relief of suffering in the world. Additionally, scientists and science educators are encouraged to learn more about the Buddhist science of mind and what it can contribute to the under-standing of human emotions, the nature of consciousness, and integrative approaches to health and well-being.

With the launch of ETSI, there were a num-ber of practical issues that had to be quick-ly addressed, including the recruitment of experienced science faculty to develop the curricula for each of subject areas.  Once the initial teaching materials were devel-oped, a pilot program (2008–2013) trained ninety-one monks and nuns—divided into two consecutive cohorts—in a five-year cur-riculum of biology, neuroscience, physics, and mathematics during six-week summer intensives taught in Dharamsala, India. At the conclusion of the pilot program, His Holiness the Dalai Lama presided over a graduation ceremony for the participating monastics and Gary Hauk, vice president of Emory University, joined to celebrate this historic achievement as the official repre-sentative of Emory University.

ETSI then embarked in 2014 on a six-year-long implementation phase for the six monastic colleges of Sera, Gaden, and Drepung in south India, with three other smaller monasteries, Rato, Tashi Lumpo and Sakya Monastery of Mundgod, participat-ing. This program was comprised of sum-mer intensives taught by faculty from Emory and other institutions, year-round study led by on-site instructors, translation and pro-duction of bilingual textbooks and instruc-tional videos, and further curriculum refine-ment. Monks and nuns at other academic monastic institutions were—and are—able to participate in the ETSI program through the pedagogical materials created, which are available on-line and in hard copy.

ETSI also promotes the creation of a new lexicon of scientific terms in the Tibetan language, and facilitates the Tenzin Gyatso Science Scholars program, which brings monastics to Emory for two-year-long res-idencies in science education. Upon com-pletion, the Tenzin Gyatso Science Scholars serve as indigenous monastic science teach-ers at their home monasteries and nunner-ies in India, helping to ensure the program’s long-term sustainability.

Looking forward, ETSI is embarking in 2020 on its next stage of development, the sustainability phase, while ETSI for Nuns continues so that the participating nuns can finish the full six-year-long ETSI curriculum.  The sustainability phase will work to further cultivate scientific knowledge, pedagogi-cal skills and research methodology for a select group of monks and nuns who wish to deepen and strengthen their ability to teach science and to collaborate on re-search projects.

This mission of ETSI, now in its fourteenth year, has remained the same during this journey, however.  Working to fulfill His Ho-liness the Dalai Lama’s vision for innovative programs that bridge the strengths of the Tibetan and western civilization,  ETSI seeks the mutual enrichment of both traditions, and ultimately, great benefits for humanity.