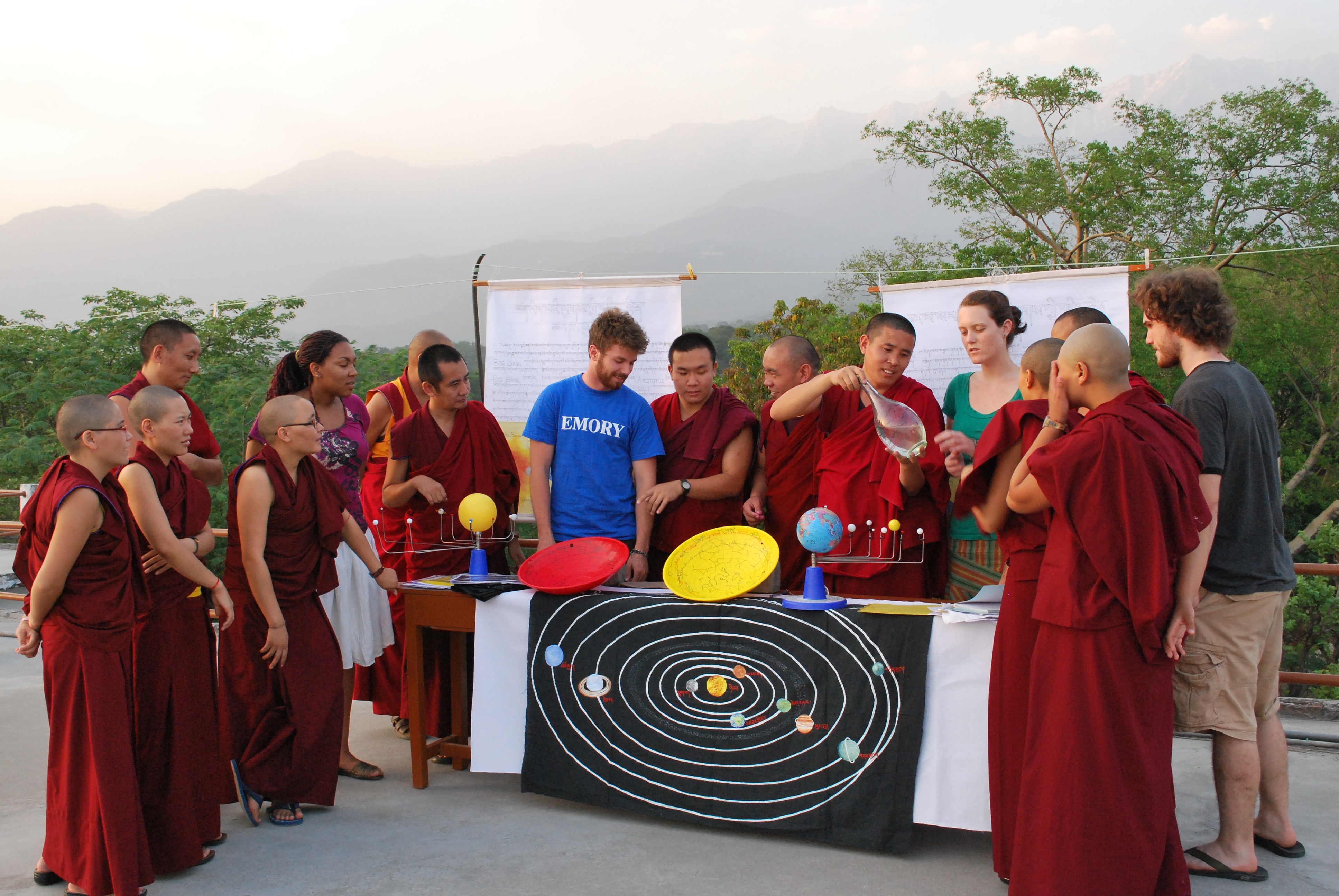 ADVANCING THE CONVERGENCE OF SCIENCE AND SPIRITUALITY

ETSI was founded with a vision to create a comprehensive and sustainable science education program for the Tibetan Buddhist monastic universities. Since its inception in 2006, ETSI has worked to develop a comprehensive curriculum that spans various scientific disciplines, including physics, biology, and neuroscience, and implement it across six years of study. Philosophy of science was included in the first year curriculum partly because the pursuit of knowledge in science requires understanding of the nature of knowledge, reasoning and evidence and partly because philosophy provides an important conceptual bridge for the monastics to understand and explore two well-established traditions.

The fulfillment of the vision has proceeded in four phases: planning, development, implementation and sustainability.

Beginning in 2006, for almost two years, a group of faculty at Emory University met regularly to develop a plan, which was presented to His Holiness the Dalai Lama for his approval when he visited Emory in Fall, 2007. To facilitate the planning efforts, in addition to the science education experts at Emory, a number of scholars with expertise in the intersection of science and Tibetan Buddhism, including Dr. Georges Dreyfus, Dr. Thupten Jinpa, Dr. Alan Wallace, and Geshe Lhakdor were invited to consult on the project. This constituted the "planning phase," of ETSI, the outcome of which was an initial curricular plan.

With the approval of the plans, a pilot program was started, in collaboration with the Library of Tibetan Works and Archives (LTWA) in the summer of 2008 in Dharamsala, India where a select group of monastic students were provided science education based on the newly developed pilot curriculum. Science faculty from Emory and other institutions traveled to College of Higher Tibetan Studies (popularly known as Sarah College) in Dharamsala each summer, from 2008 to 2013, to offer month-long intensive sessions to ninety-one Tibetan Buddhist monks and nuns that comprised two cohorts, one year apart. The monastic students were drawn from twenty-two monastic institutions representing all the four major schools of Tibetan Buddhism–Gelug, Sakya, Nyingma, and Kagyu–as well as Bon. The first cohort completed the five-year curriculum and graduated from the program in the summer of 2012, and the second cohort graduated in the summer of 2013.

Summer 2014 marked the beginning of ETSI’s implementation phase. That summer, ETSI started introducing the six-year curriculum in philosophy of science, physics, neuroscience, and biology at three major Tibetan monastic universities located in southern India. This phase was comprised of several components, including summer intensives, year-round study, development of distance-learning materials and tools, and further curriculum refinement successfully, and it successfully established science education as part of the core curriculum of the partnering monasteries. The number of students in the program grew from 345 in 2014 to 1496 in 2019—roughly equivalent in population size to a small liberal arts college, with the challenges to match, such as the recruitment of faculty to fill the 114 teaching positions needed in 2019.

During this phase, ETSI completed the full development of the science curriculum, publication of the 19 bilingual primers, unpacking of the contents, and production of a complete set of lecture videos taken during the summer intensives. In the final year of this phase, the first group of monastic students, numbering over 233, graduated from the 6-year ETSI science curriculum, many of whom would participate in ETSI’s next phase—the Sustainability Phase.

One major component of the ETSI’s implementation phase will complete in 2019, with the full development of the science curriculum, publication of the 19 bilingual primers, unpacking of the contents, and the production of a complete set of lecture videos. In that year, the first group of monastic students, numbering over 150, will graduate from the 6-year ETSI science curriculum, many of whom would hopefully participate in ETSI’s next phase—the Sustainability Phase. ETSI will then focus on making the science education program at the monasteries sustainable by providing intense courses to select group of monastics to deepen the understanding of the 6-year curriculum, by organizing workshops on research and pedagogy, and by creating teaching materials. The sustainability phase is projected to go from 2020 to 2026, with creation of two cohorts of monastic science teachers, one year apart, who will undergo training every summer for five years each.

The six-year-long ETSI curriculum includes coursework in Philosophy of Science for one year and six years of coursework in Physics, Biology, and Neuroscience. These areas were chosen with input from the Dalai Lama, focusing on subjects where monastics would be most likely to have an impact eventually. The curriculum was originally implemented through distance learning and summer intensive teaching sessions with visiting faculty designed to complement each other. The distance-learning component consists of specialized bilingual textbooks, called primers, and video lectures. However, with the completion of the implementation phase, the curriculum is now totally implemented by the participating monasteries' local science teachers. ETSI has a massive collection of bilingual science material, which makes the ETSI curriculum accessible to other countries of the Himalayan region and other traditionally Buddhist countries and any interested English-speaking parties.

The six-year curriculum for each discipline was planned according to a progressive series of learning objectives. Materials were progressively refined, and new materials developed as the curriculum unfolded over the six years. The unrolling of the curriculum was done during the summer intensives. Typically, a summer session for each discipline lasted for 7 teaching days and 1 exam day, including 2 morning sessions and 2 afternoon sessions (each 90 minutes). Morning sessions were mainly used for lectures and discussions, while afternoon sessions were reserved for more hands-on learning such as experiments, demonstrations, and activities. Recruited faculty who traveled to India to teach these summer intensive courses helped develop lecture slides, in-class experiments, discussion topics, and other related course planning and refinement.

ETSI has published 19 bilingual primers to support its six-year science curriculum for the monastic institutions. Complementing these main course books are supplementary materials such as Brain Facts by the Society of Neuroscience and Philosophy of Science: A Very Short Introduction by Samir Okasha, and whole sets of bilingual lecture slides. Additional supplementary materials are being translated to create a rich body of Tibetan-language science materials for use in the curriculum.

Another important project that the ETSI’s translation team is working on is the expansion of a bilingual science dictionary that ETSI published in 2019. The published dictionary contains the scientific lexicons that the team has developed and standardized, through the process of regular discussions amongst the ETSI’s translators and rigorous deliberations at ETSI’s International Conference on Standardizing Scientific Terms, held annually at Emory University since March, 2009. In December 2019, the 11th annual conference was held at Drepung Loseling Meditation and Science Center with participation from the ETSI translators, linguistic experts, educators, and monastic scholars and students. Thus far more than 6000 scientific terms have been created and finalized.