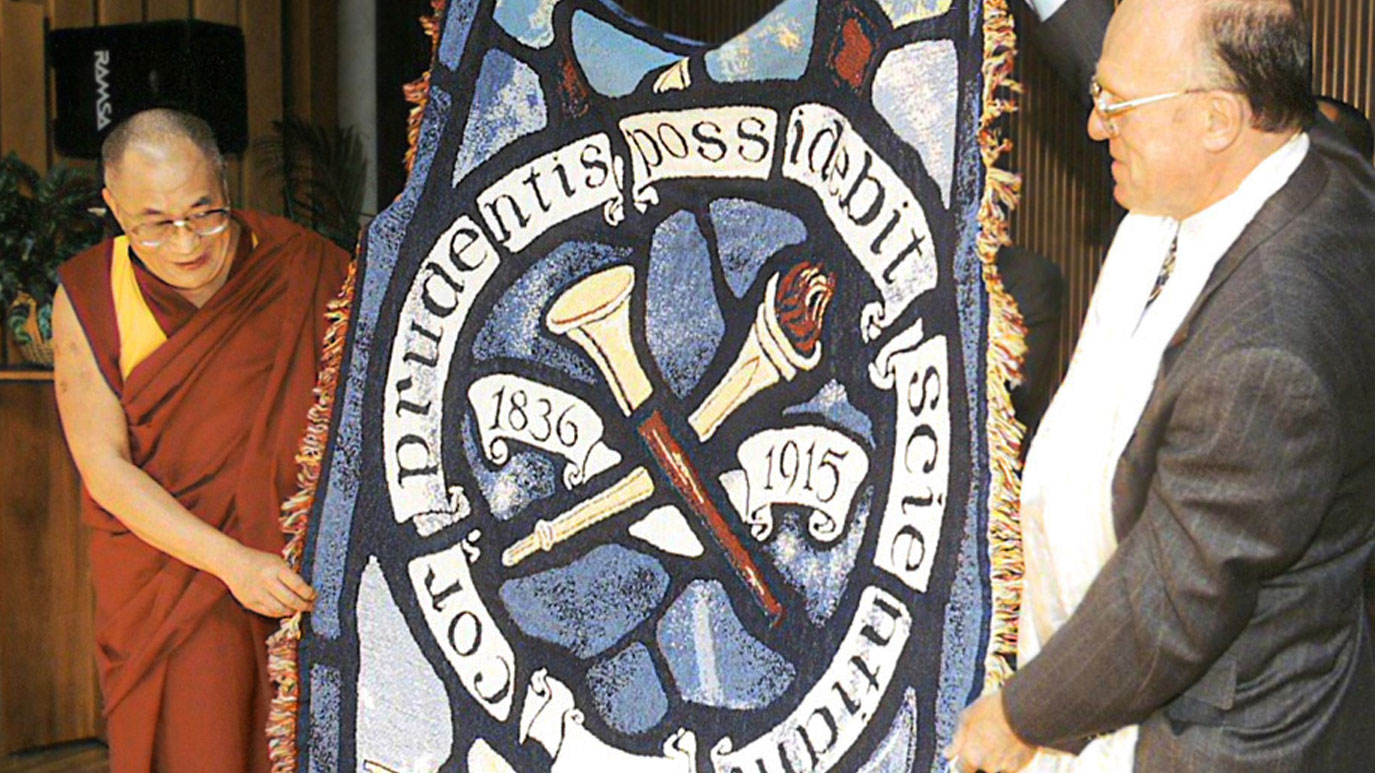 DEVELOPING LINKS BETWEEN THE WESTERN AND TIBETAN TRADITIONS

THE BEGINNINGS OF THE PARTNERSHIP

The Emory-Tibet Partnership is, in many ways, the natural outcome of a special relationship that began when Lobsang Tenzin Negi, a Tibetan monk, entered Emory's Institute of Liberal Arts and began work with his advisor, Dr. Robert A. Paul. Paul was an ideal mentor given his extensive knowledge of both Tibetan and western models of the mind. A cultural anthropologist and psychoanalyst, Paul played a significant role in encouraging Negi to develop links between the western and Tibetan traditions. This mentor-student team worked with the Office of His Holiness the Dalai Lama and Emory's central administration, led by Dr. Gary Hauk, to formalize a series of agreements leading to the establishment of the Emory-Tibet Partnership.

Inaugurated in 1998 by His Holiness as an affiliation between Emory University and one of Tibet's most esteemed academic institutions and Negi's alma mater, Drepung Loseling Monastic University, ETP has matured into a multi-dimensional organization encompassing relationships with the Library of Tibetan Works and Archives, The Institute of Buddhist Dialectics, the Tibetan Medical Institute, and other Tibetan cultural and monastic institutions in exile.

Our program has grown organically like a beautiful tree that continues to send out branches in wonderful ways. The Emory-Tibet Partnership has helped elevate the profile of Emory as a place where people interested in the study of Tibetan Buddhism should come, and in fact, need to come, in order to gain access to some of the wonderful programs we've developed. - Dr. Gary Hauk, Emory University Vice-President

Drepung Loseling Monastic University, Emory's original partner, exemplifies a system of academic excellence complementing the best of western academia.  Located at the crossroads of India, China and the Middle East, Tibet served—for centuries—as a repository of many important traditions of learning.  After 12th century invaders destroyed the ancient Indian university of Nalanda (reputed for attracting scholars from as far away as Indonesia, Persia, Korea, Japan, China and Turkey), Tibetan masters continued to analyze, refine, and expand the sophisticated systems of philosophy, psychology and science practiced there—thus saving this precious legacy from extinction.

After the Communist invasion of Tibet in the 1950s, this profound storehouse of knowledge was again preserved from annihilation through the painstaking efforts of both Tibetan scholars and ordinary people.   Texts were smuggled out of the country, monastics that escaped to India reconstituted entire volumes from memory, and the great monastic universities, including Drepung Loseling, were reestablished in exile so that the teachings and meditation practices could be passed along via unbroken lineages.  Today, this ancient heritage informs the work of the Emory-Tibet Partnership.

ANCIENT WISDOM FOR A MODERN WORLD

While western science has focused primarily on an exploration of the outer world, the Tibetan tradition devoted itself to rigorous investigation of the inner world. Only recently has western science begun to probe some of the same fields of inquiry the Tibetan tradition has spent centuries exploring and enriching: science of mind, the nature of the person and the cosmos, and integrative approaches to mental and physical health.

On-going scientific research is now demonstrating a host of tangible benefits connected to the practice of inner qualities such as compassion, mindfulness, loving kindness, and forgiveness. With time-tested methods for fostering and enhancing these advantageous traits, the Tibetan tradition offers sensible and effective practices that can alleviate suffering in the modern world. Likewise, genuine dialogue encourages both traditions to generate new insights and methods for solving some of humanity's most intractable problems.